Social media is an emerging field in online communications and marketing. As such, there is a reasonably steep learning curve to overcome before your social media strategy becomes a success. There will be mistakes made along the way but the idea is that with every mistake made, you learn how to do things better.

Personally, I find it easier to learn by being shown what not to do. Here’s a list of the most noteworthy Twitter blunders this year (so far!) and the lessons that every social media executive should glean from them.

Bing tried to leverage the online activity around the tsunami in Japan in an effort to raise brand awareness and drive traffic to their site. The $1 donation for every retweet was a blatant attempt to provide a “feel-good incentive” to anyone willing enough to spread the word. Furthermore, the token landing page did not provide any useful resources that the public couldn’t access with a simple Google search.

Instead they advertised existing services such as Hotmail and Messenger, which people could theoretically use to get in touch with loved ones in Japan. Even the sum they donated appeared to be a paltry offering in light of the devastation that occurred.

Biggest mistake: Insincerity. The whole thing reeked of insincerity and showcased Bing as nothing more than a company willing to make a quick profit from other people’s misfortune.

Fashion designer Kenneth Cole thought he was being clever by hijacking the #Cairo hashtag to promote his spring collection. Bad move.

The tweet in question states:  “Millions are in uproar in #Cairo. Rumor is they heard our new spring collection is now available online at http://bit.ly/KCairo -KC”

Lesson to be learned: Resist the temptation to hijack a trending hashtag and then spam the followers with messages regarding your brand or product. No matter how you frame the message, if it is not relevant to the topic it will be seen as nothing but spam.

The Red Cross had an unfortunate incident earlier this year when it accidentally tweeted, “Ryan found two more 4 bottle packs of Dogfish Head’s Midas Touch beer… when we drink we do it right #gettingslizzerd”. 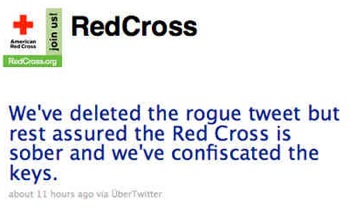 Lesson to be learned: Show grace under pressure. Red Cross did not indulge a knee-jerk reaction. The employee responsible was not fired. Instead, they used humour to apologise to their followers and acknowledged that a human error was made. More importantly, the mistake evolved to become a brilliant fundraising opportunity led by Dogfish Head Craft Brewery.

Slimfast sponsored the #RoyalWedding hashtag on the 29th of April hoping to take advantage of the audience enthralled by the celebrations. The expected traffic generated by the hashtag threatened to crash Twitter’s servers.

However, despite all the attention surrounding the trending topic, Slim Fast only gained 336 followers following the event.

What went wrong? The lesson to be learned here is that, exposure does not necessarily equal engagement and much less, revenue from social media sites. Slim Fast failed to realise that Twitter’s biggest strength was precision marketing. Instead, they decided to try and reach a mass audience with an un-targeted message that fell on deaf ears.

The other lesson: Relevancy is key. Slim Fast’s message as a brand just did not fit in with the royal wedding celebrations. Weight loss was the furthest thing from spectators’ minds while they watched a commoner marry her prince. However, had they sponsored a tweet or a fan page about Pippa Middleton’s behind, they might have had better chances!